I grew up programming on my TV, with a Sinclair ZX81 followed by a ZX Spectum. Computers built into keyboards, that you can easily plug into a TV, are part of my DNA. So, given this, how could I resist buying the new Raspberry Pi 400!?

The following are my initial thoughts on the hardware, and on using it for light weight development.

The Raspberry Pi 400 is, essentially, a Raspberry Pi 4 housed within a keyboard. You can read much better descriptions elseewhere, but the main points from the tech specs are:

(full specs can be found here)

First Impressions on the Hardware

It was very easy to plug the 400 in and get it up and running. It’s a neat device, with a good collection of ports and connectors at the back. The keyboard is…ok. The device is £67 in the UK. I bought the kit (which includes a mouse, power supply, HDMI cable, and official guide) for £94. Given the price point the keyboard is absolutely fine, but it does feel a tiny bit “plasticy”.

The 400 doesn’t have an audio-out. Audio is delivered via the HDMI output. For me, that’s a problem because my monitor doesn’t have speakers. It’s not a BIG problem, but it’s something I hadn’t considered.

The other thing the 400 doesn’t have is the connector for the Raspberry Pi camera module. Again, this isn’t a big deal for me but if you were expecting to build any camera projects then the 400 isn’t the right choice.

The 400has the GPIO header at the back, so with a ribbon cable you can build electronics projects very easily. I have an Adafruit T-Cobbler Plus which makes it very easy to connect the 400 to a breadboard and build…stuff! 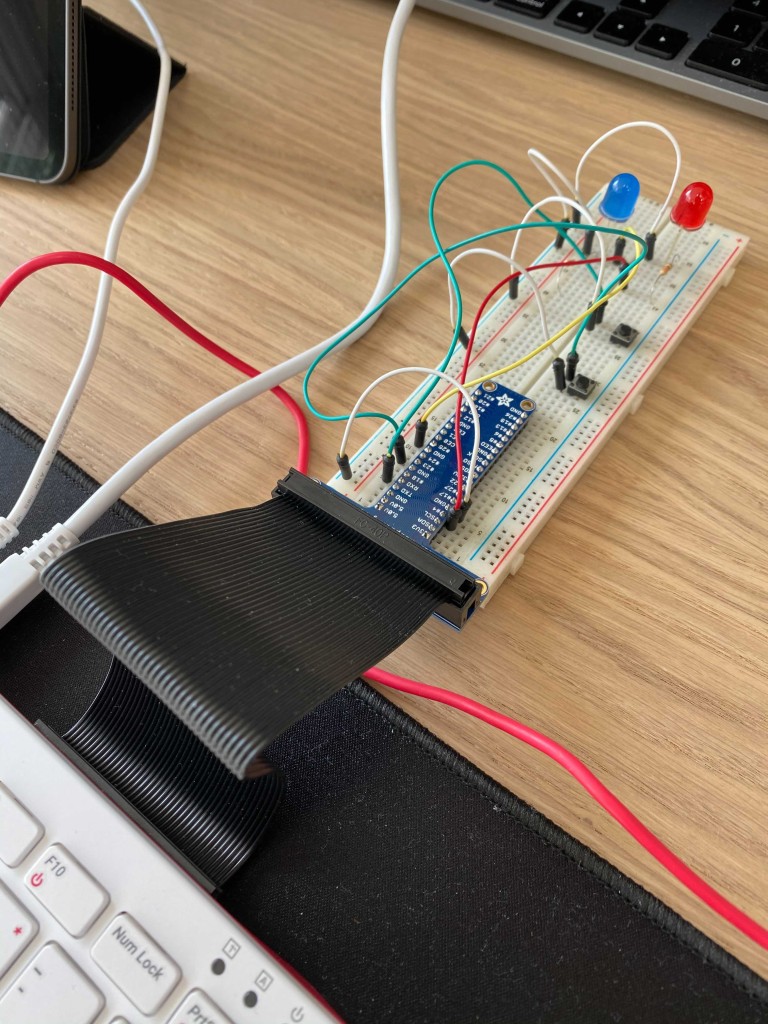 The 400 starts up quickly, and is very capable as a general purpose desktop device. I’ve spent most of today browsing the web on it, while also installing apps, running docker containers, and building code, and it’s felt fast/snappy pretty much most of the time.

Overall, the hardware is pretty good and I love the form factor. I can see schools/code clubs purchasing these devices and using the in their computing labs.

I’ve spent the day setting my Raspberry Pi 400 up, and I’m pretty impressed. My setup has included:

On the whole, this setup was easy. So easy it was almost boring! I had a couple of issues, but on the whole it was very easy to set my Raspberry Pi 400 up so that I can write code, use Docker, and push changes to GitHub. For example, I’m currently writing this blog post within VS Code, building it using Jekyll within a Docker container.

The only issue that I hit is the ARM support for various Docker images. The default Ruby dev container image wouldn’t build because it had some dependencies that didn’t have ARM variants. In the end I took the Ruby 2.7 docker image as a base, and copy/pasted into my own Dockerfile the parts of the defintion I needed (removing Node, Zsh, Oh my Zsh and a few other things). I’m not sure exactly what it was that was failng to build, so I need to go back and work it out, but it’s worth remembering that if the Rasberry Pi is ARM based, and not all development tools have ARM builds.

Having installed tools, and played around, I’ve built some very basic Rust code (with build times comparible to my MacBook!), I’ve written some GPIOZero based Python 3 code (controlling butons and LEDs), and I’ve set up a Jekyll/Ruby dev container and built/updated my blog.

I own several Raspberry Pi computers (1, 2 and 3). Most of them are the Model B format, but I have couple of Zeros too. All of them sit in a box, unused. I’ve played with them, then put them away. Part of that is because the performance hasn’t been that great, but the form factor is a major factor. It feels like the Raspberry Pi 400 has the power I need (for casual projects), and comes in a form factor that I can happily leave plugged in on my desk.

On top of that…it gives me a massive nostalgia rush using it! 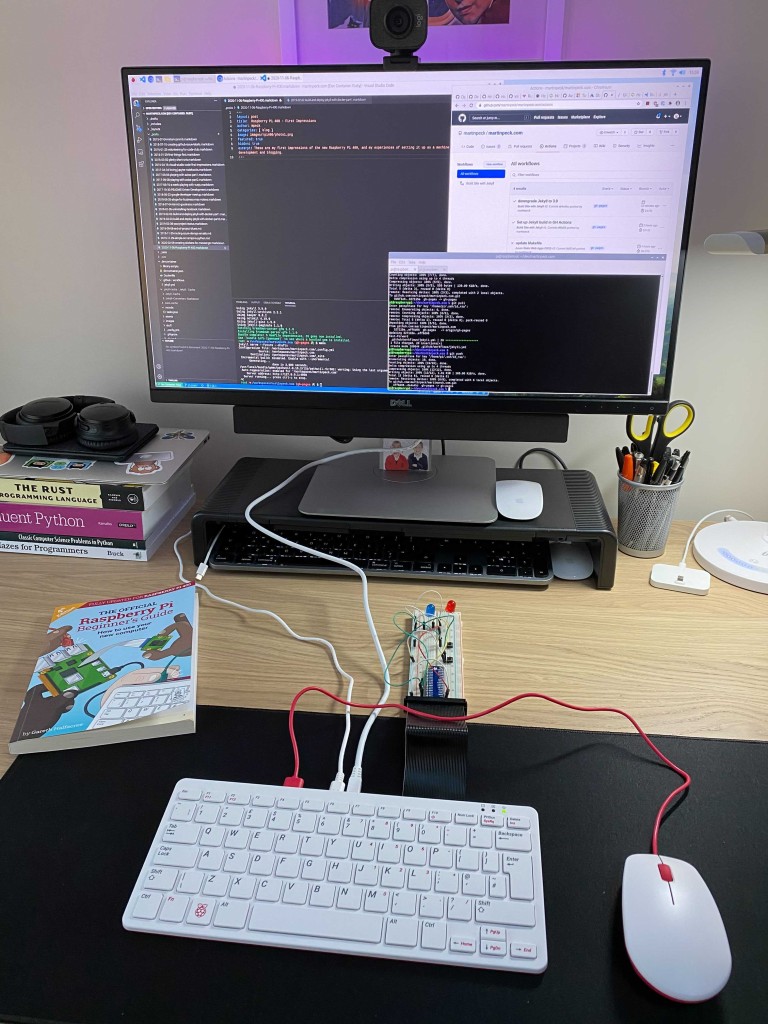 In the picture below I have two instances of VS Code (both running dev containers), plus I’m browsing. It takes it all in its stride. 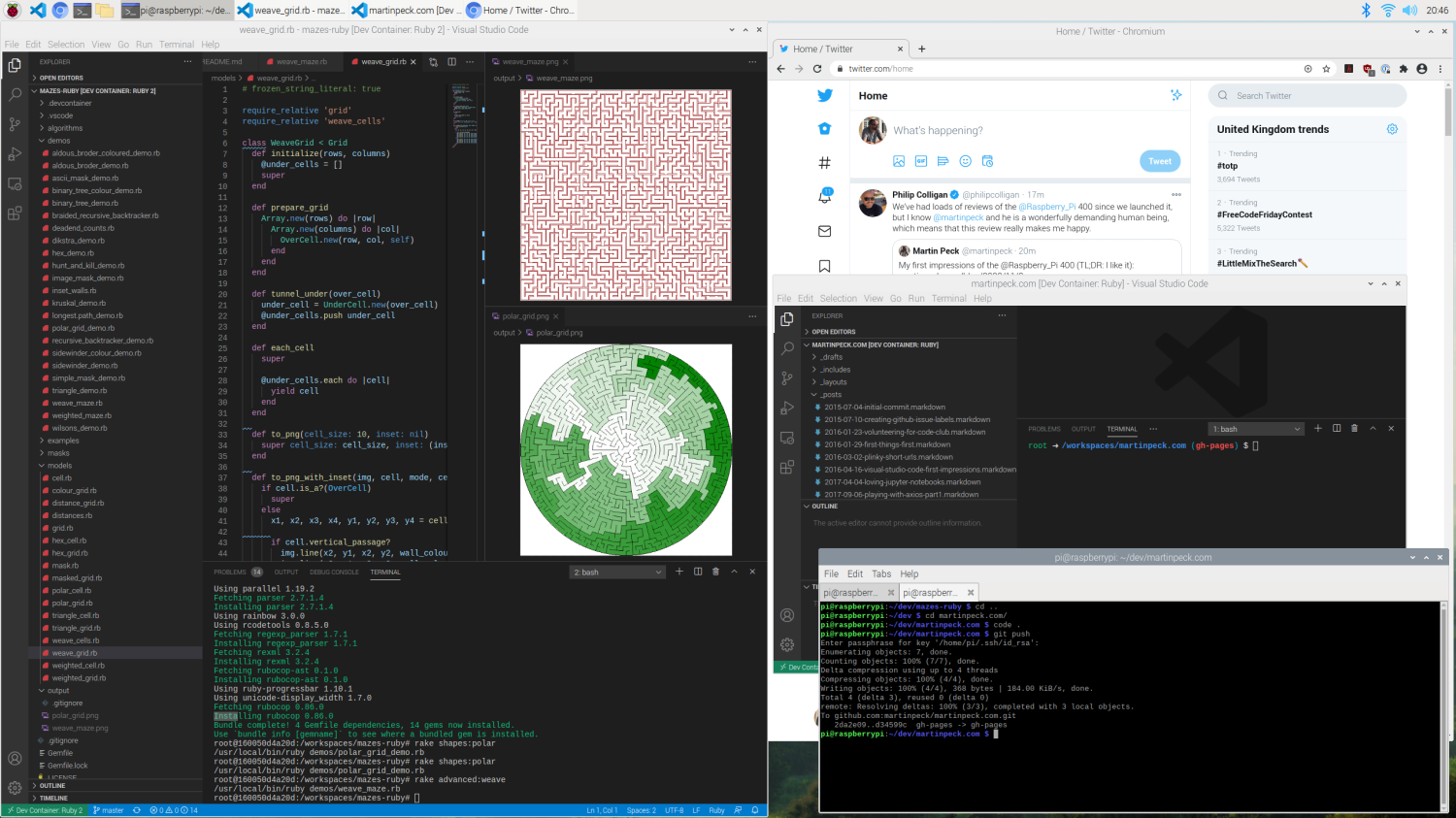 I’ve not tried building anything huge…but that’s not what it’s for. It’s for having fun…

…and I’m absolutely having fun!