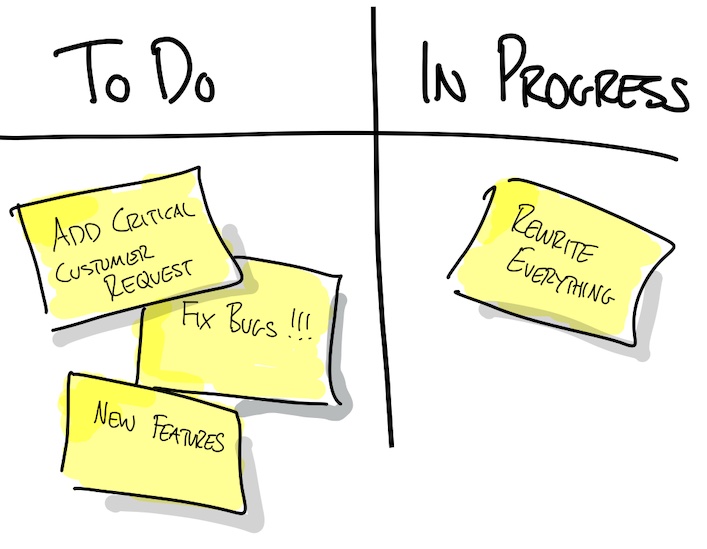 It’s common in software engineering to find yourself in a situation where you suddently have the idea that “if I just rewrite all this code life will be SO much better”.

It often happens after you’ve been frustrated by a a set of bugs, or performance issues. It’s also very common when you inherit someone else’s code.

(honestly…that last one about Powershell gets a free pass from me. Go for it!)

Replacing large parts of an existing code base is not a bad thing, and there are very often good reasons to do it.

Some of them include…

Some projects get to a stage where everything is brittle, and bugs are hard to control. In these situations it might make sense to stop, rewrite stuff, and then move forward with a better base.

You’ve Hit a Limit on User Experience or Functionality

There are times when the features you want to add, or the user experiences you want to deliver, are just not possible with the current code base. You may have a design team asking for new features that you just can’t deliver. This might be a good reason to rewrite.

The Cost of a Rewrite

I’m sure there are plenty of other good reasons for rewrites, but in all cases it make sense to keep in mind the Cost of a rewrite.

How to Discuss your Rewrite

Have a Good Reason

If you’re going to convince people that this is a good idea, it better actually be a good idea. “I want to use the new hotness” isn’t good enough.

Do some research. Gather real numbers.

When discussing a rewrite, you need to show your working.

Bring a plan to these discussions.

Even if your plan has holes, having something that illustrates the way you’d approach the rewrite makes it easier for others to see that path forward.

Present the Down Side

Someone is likely to point out all the problems your rewrite will bring. You’ll find it much easier to convince people if you’ve already throught these through, and you bring them to the conversation yourself. You should list the downsides before they do.

Even if you don’t have answers for these things, the fact that you have clearly thought about them will help others see this as a credible suggestion.

One of the downsides is time and cost. Bring your thoughts on….

… and be honest with these things. Present a pesimistic view of these downsides.

Be Prepared For “No”

If you’re suggesting a wholesale rip and replace of a major component, be prepared to hear people say “no”.

Don’t get offended when someone pushes back. Don’t react badly. You are going to be told “no” and so prepare yourself for that.

It’s highly likely that the person saying “no” is they’re worried about the things listed above. They’re looking at your change and thinking “why do we need to do this when we’ve got so many other things to do?”.

They might see the issues you see. They may not feel the pain of the current code. If you’ve done a good job of presenting the facts then, hopefully, they’ll have a better understanding of why you want to rewrite things, but they may also just need time.

Be prepared for “no”, listen to the feedback, build a better case for your rewrite, and try again later.

Be Worried about an Easy “Yes”

If you suggest a rewrite and instantly get an easy “Yes…DO IT!” then stop. Make sure everyone understands what you’re suggesting. Don’t plough into the rewrite only to get half way through and have the rest of the team ask “what the hell are you doing!?!”

A rewrite shouldn’t get an easy pass. If it does then, potentially, no one understands what you’re suggesting. It’s worth double checking.

Good luck with your rewrite! I’m sure it’ll be everything you hope it’ll be. It’ll probably be finished way quicker than you expect, and life will be perfect afterwards.*

« Things to Remember When Writing Code