One of the things I find, when volunteering at the school where I run a Code Club, is that the kids always want to spend lots of time drawing backgrounds for their Scratch games, or creating awesome sprites. Sometimes they spend more time doing this than actually writing code.

So, for this week, I thought I’d try showing them how I go about designing a Scratch game and how I try and get the logic of the game working first, and make it look pretty later. We’re building Viking themed quiz games (a little like Code Club’s Brain Game project).

First, I showed them this sketch that I’d made to help me think about the game. It’s deliberately “scrappy” in nature, with some simple bullet point notes about what I want to happen in the game…

Next, I showed them how I took my scrappy sketch and built a game with equally scrappy graphics… 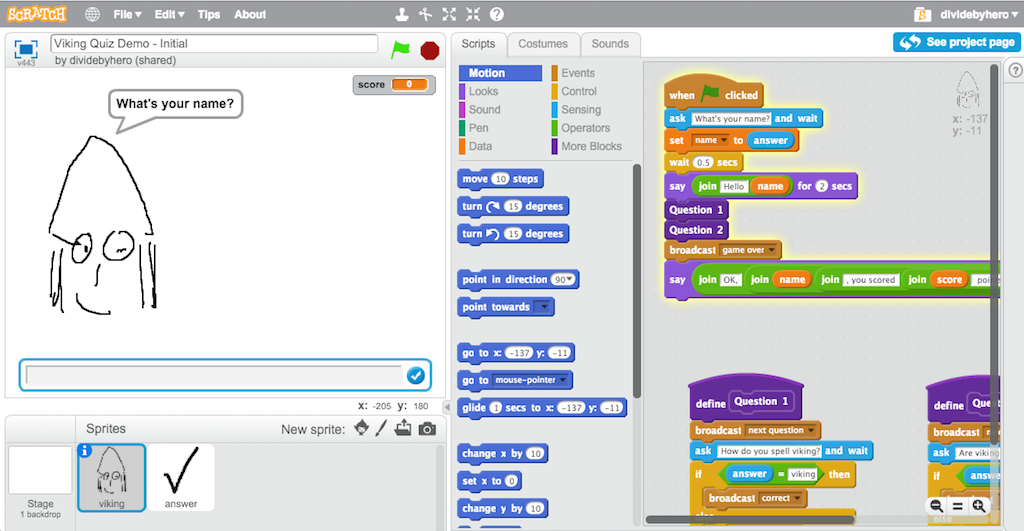 You can see this project here: https://scratch.mit.edu/projects/95911754/#player

As you can see, I’ve kept my poor quality graphics and concentrated on getting my Scratch code working.

I then explained that, once the game was working, I went back and make it look better by adding better images and enhancing the game with some animations. Here’s the final game that I showed them…

You can see this project here: https://scratch.mit.edu/projects/95721352/#player

My hope, in all of this, was that by showing them this progression…

… that they would focus on getting their games working before they then spent a lot of time making them look nice.

They did take some time to plan out their games on paper. However, as soon as they moved to the computers the lure of the sprite and background editors was too much for them. To be honest, I can’t blame them - it’s the bit that’s most fun.

Perhaps my mistake was showing them my final/finished project. Maybe I should have held back the finished project for another week. I’ll try this next time.

« Volunteering for Code Club plinky - A bit like Bitly »